A new series of reports from the Biden administration highlights the national security threats posed by climate change.

Last week, the Biden administration released four separate reports that all shared a common message: climate change poses a grave risk to national security, and that risk is only going to increase unless governments around the world take dramatic steps to address the climate crisis.

The four documents—released by the Departments of Homeland Security, the Department of Defense, the National Security Council and the director of national intelligence—provide a panoramic view of the risks that climate change poses to the U.S.’s national security.

The resulting picture is dire. Across the board, the reports concluded that climate change will exacerbate existing geopolitical tensions while also creating new and unprecedented threats. Geopolitical tension will rise as countries argue over the best way to respond to climate change while seeking to protect their own national interests in the face of a changing physical and geopolitical landscape; international competition for critical resources in vulnerable locations like the Arctic will increase; malign state actors such as China will seek to strengthen their hands by offering assistance to less stable countries struggling to contain the political unrest related to the massive human migration caused by climate change. The list goes on: 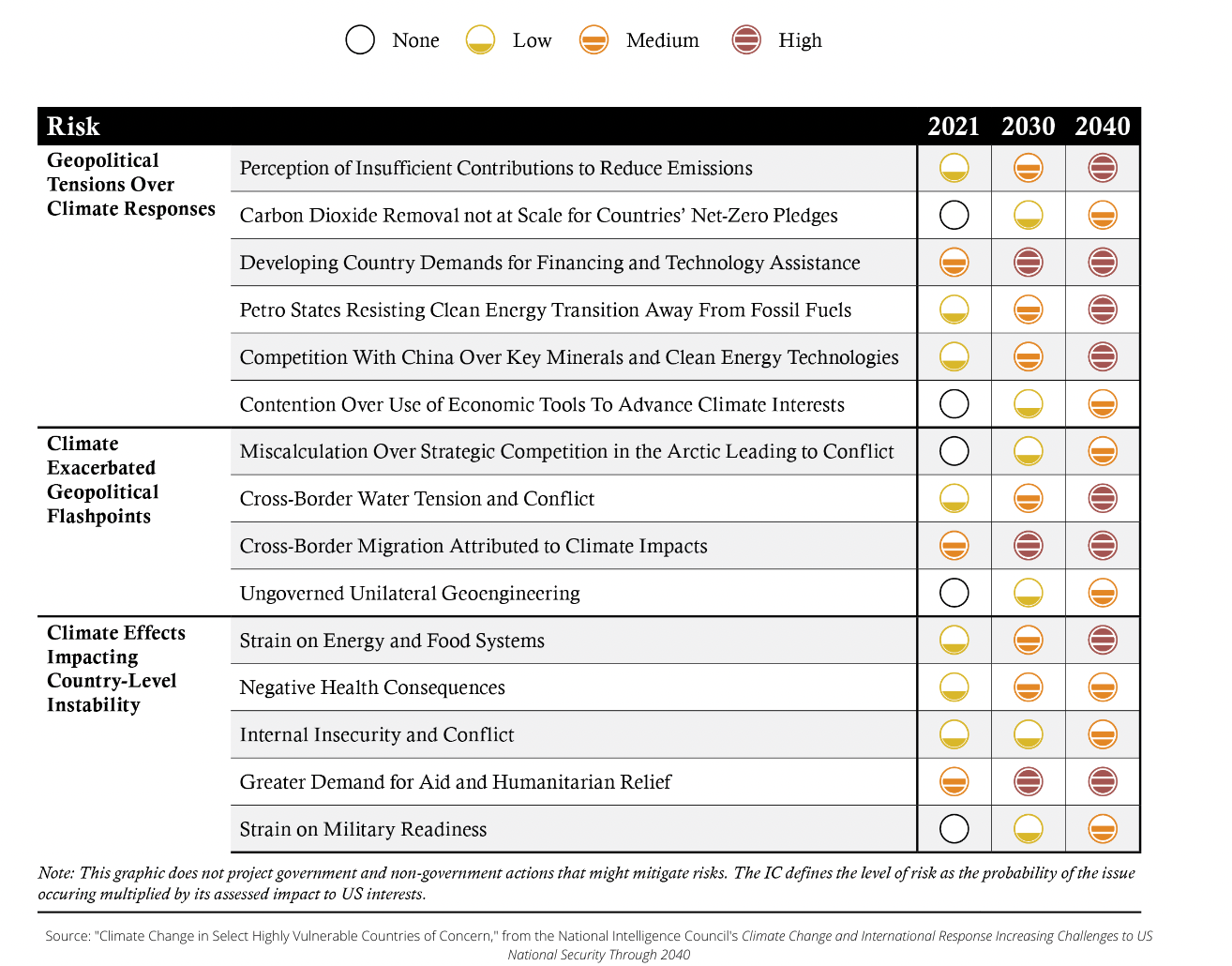 The reports represent an invaluable resource as the U.S. and its global partners seek to confront the 21st-century climate imperative. With President Biden set to attend U.N. climate talks at COP26 in Glasgow next week, and the fate of the president’s domestic climate agenda in question in Congress, the reports contain a pressing call to action. “High-emitting countries would have to make rapid progress toward decarbonizing their energy systems by transitioning away from fossil fuels within the next decade, whereas developing countries would need to rely on low-carbon energy sources for their economic development,” concluded the National Intelligence Council’s report. “Quickening the pace and trajectory of the energy transition will depend on reducing key countries’ continued dependence on fossil fuels; investing in research, development, and deployment of low-carbon technologies for specific sectors that are hard to decarbonize; and enacting policies to incentivize renewable energy sources.”

The reports also affirm a basic tenet of Silverado’s work: that none of the complex, 21st-century challenges that the U.S. faces can be dealt with in isolation from the others. Silverado’s three areas of focus—cybersecurity, trade and industrial security, and EcoSec (or the intersection of ecological and economic security)—all form interconnected parts of the same matrix of problems. The physical and political effects of climate change are inflaming geopolitical tensions that are already fraught due to trade irritants and cyber incidents. Yet achieving net-zero global goals by 2050 will require the U.S. to find new ways to deepen its collaboration and align its ambitions with its closest allies and staunchest adversaries. This new series of reports provides a powerful illustration of the benefits of a holistic approach to addressing the climate crisis.