But a green goods trade deal is likely to to fail without concurrent climate and environment commitments.

The urgency of short-circuiting our impending climate catastrophe is matched by an equally pressing need for the Biden administration to engineer a post-COVID U.S. economy that is simultaneously climate-forward and that can generate broad-based growth and durable employment opportunities nationwide. While the U.S. ultimately needs a comprehensive strategy that includes investment in infrastructure, workforce development, government procurement opportunities, and R&D to achieve its long-term goals, pursuing EGs negotiations in the short-term presents a ready opportunity to accelerate international deployment of U.S. environmental technologies.

Experience to date with both environmental goods trade and environmental goods market access negotiations — especially in the form of the WTO plurilateral Environmental Goods Agreement (EGA) negotiations of 2014–2016 — offers the Biden administration with a number of lessons on a potential path forward for green goods market access that can contribute to the Build Back Better agenda and the goal of reaching net-zero emissions no later than 2050.

Despite reporting that the EGA failed because of technical matters such as product scope and staging, the principal reason that the negotiations failed was because the ‘like-mindedness’ that advances all trade liberalization exercises did not extend to domestic and international commitments and practices on climate and the environment. Recall that EGA was novel for a tariff negotiation in that it sought to be both economically significant and environmentally credible. While substantial efforts were made to develop an environmentally credible list of goods within the constraints of the Harmonized Tariff System, it proved impossible to tamp down the mercantilist instincts of certain members in favor of a principled list of environmental goods. The key lesson learned from EGA is that, in the absence of concurrent environmental and economic like-mindedness, such a negotiation is likely to fail, precisely because it creates a mismatch in priorities that undermines the market access incentive to negotiate. 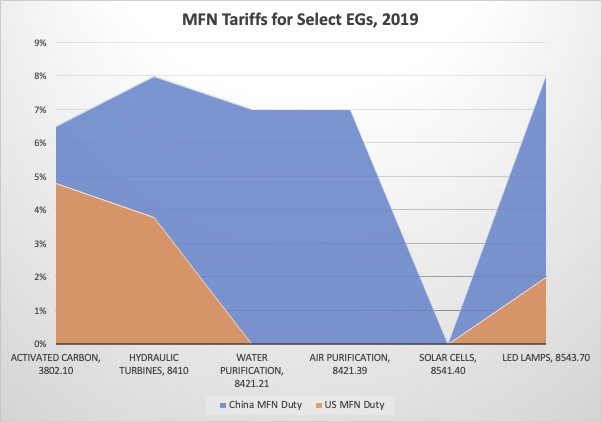 The resulting like-mindedness mismatch between the United States and China within EGA was particularly stark. China’s relatively low environmental standards and high tariffs on EGs and the U.S.’s relatively high environmental standards and low (and often zero) tariffs on the like provided China with little incentive to negotiate market access in good faith. More importantly, the mismatch created little demand-side incentive for China to allow for reciprocal market access. As a result, China, the world’s most brazen polluter and concurrently its largest exporter of EGs, had no technology access (i.e. environmental) or economic (i.e. market access) incentives to conclude a deal.

This form of green mercantilism is particularly dangerous for the United States as we grapple with two concurrent challenges: 1) the defined need to address domestic and transboundary climate challenges, and 2) the attendant need to capture the economic benefits of those solutions to offset the economic losses from decarbonization elsewhere. Against this background, the objective of any green trade deal for the Biden administration is fairly straightforward: to utilize available trade levers to advance environmental goals and capture the economic benefits of the green economy. In a new tariff reduction discussion, what best serves the U.S.’s interests — and most closely aligns with its values — would be to broaden the definition of like-mindedness to include the quality of partners’ environment and labor regimes. After all, a worker-centric trade policy would necessarily eliminate the opportunity for further environmental and labor arbitrage in all market access negotiations.

The good news for the Biden administration is that this confluence of environmental and market access goals creates relatively low-hanging fruit for administrative action. In the brief four-month window in which it can capitalize on TPA proclamation authority, the administration could establish several bilateral and/or regional interim agreements that would be environmentally significant and also provide meaningful market access for U.S. environmental technologies. For instance, an interim agreement with the European Union, whose economic and environmental interests practically mirror our own, would provide an important benchmark for future multilateral and regional deals, in terms of product scope by creating a reference list of what constitutes an environmental good (an issue that has long plagued EGs negotiations) and by establishing the minimum domestic environmental criteria that countries need meet before gaining access to the prized U.S. market.

Similarly, the administration could consider concurrent efforts with Japan or the CPTPP countries. Developing countries within CPTPP have a particular need for technology access, and an interim agreement could accelerate both environmental regime and technology uptake and push these countries to conclude high standard international trade and environmental commitments through CPTPP or other regional arrangements. These short-term efforts would not only serve as important jumping off point for broader U.S. regional trade negotiations; they would also complement parallel or subsequent multilateral efforts to liberalize trade in environmental goods. None of these efforts would preclude the United States from entering into contemporaneous plurilateral negotiations in the WTO, and they would in fact bolster those efforts by incubating solutions to technical matters that are likely to persist in new multilateral negotiations.

Terminal gridlock among its members, existential questions about its role as a negotiating forum, as well as recent challenges to the legality of its plurilateral agreements do not make the WTO a realistic forum within which to meet the climate urgency of a principled environmental market access agreement. Nevertheless, if the Biden administration and WTO members are serious about reinvigorating environmental goods negotiations, an important first step would be to return to the Davos Statement that initiated the original EGA. Countries that signed onto the Davos Statement agreed to eliminate tariffs on goods included on the APEC List of 54 environmental goods, but in the absence of concluding an EGA, APEC tariff elimination was never scheduled. A significant first step toward reinvigorating EGA negotiations would require, as the price of (re)entry into EGA negotiations, a notification to bind those products at zero, since some markets, including China, have already allowed tariffs to drift above the 5% threshold established in the APEC Agreement. This move would both raise ambition for concluding an EGA and minimize the presence of reputational free-riders within the negotiation, including nations that derive ‘green halo’ benefits from participation but have not demonstrated ambition or intent to conclude negotiations.

The Biden administration has until June 30, 2021 to proclaim tariff reductions under the authority granted by TPA. It’s time to get to work.