The Long and Winding Road to a Global Carbon Price

It’s hard to price something that “promises [the] non-delivery of an invisible resource to no one.”

The costs of unregulated carbon emissions are all around us: skyrocketing global temperatures, rapidly rising sea levels, deteriorating ecosystems, and the myriad downstream political and economic consequences of these ecological changes. As the international community works towards net-zero goals by 2050, a growing chorus of voices is calling for a global carbon price to help accelerate emissions reductions. Achieving such an objective will not happen overnight, and reaching an international consensus on the pricing structure for a non-commodity will likely require years of negotiations. Although the difficulty of reaching such an agreement should not be a deterrent, it does mean that the global community must start working now to lay the foundation for an internationally harmonized system.

So, what is the price of carbon itself?

Over the past 31 years, jurisdictions around the world have adopted various systems for pricing the reduction of emissions in an effort to incentivize producers to reduce their carbon outputs.  Carbon pricing systems are designed to capture the external cost of emitting carbon and shift the cost to the source. Producers then have the choice between reducing their emissions or paying a higher price to cover those emissions.

Although individual countries are at liberty to choose which type of carbon pricing mechanisms they want to employ, two systems currently predominate: carbon tax systems and emissions trading systems (ETS).

Although there is some debate about the effectiveness of these systems, the more immediately practical issue with carbon pricing stems from “the inconsistency of carbon pricing systems,” as the World Trade Organizations (WTO) Director General, Ngozi Okonjo-Iweala, has suitably pointed out.

What does the current landscape of carbon pricing systems look like?

The current international carbon pricing landscape is defined first and foremost by its inconsistency. As of April 1st, 2021 there was one regional, 56 national, and 42 subnational carbon pricing mechanisms either in use, scheduled or under consideration around the world. Specifically, there are 20 ETS systems and 32 carbon tax systems implemented, scheduled, or under consideration at the national level. 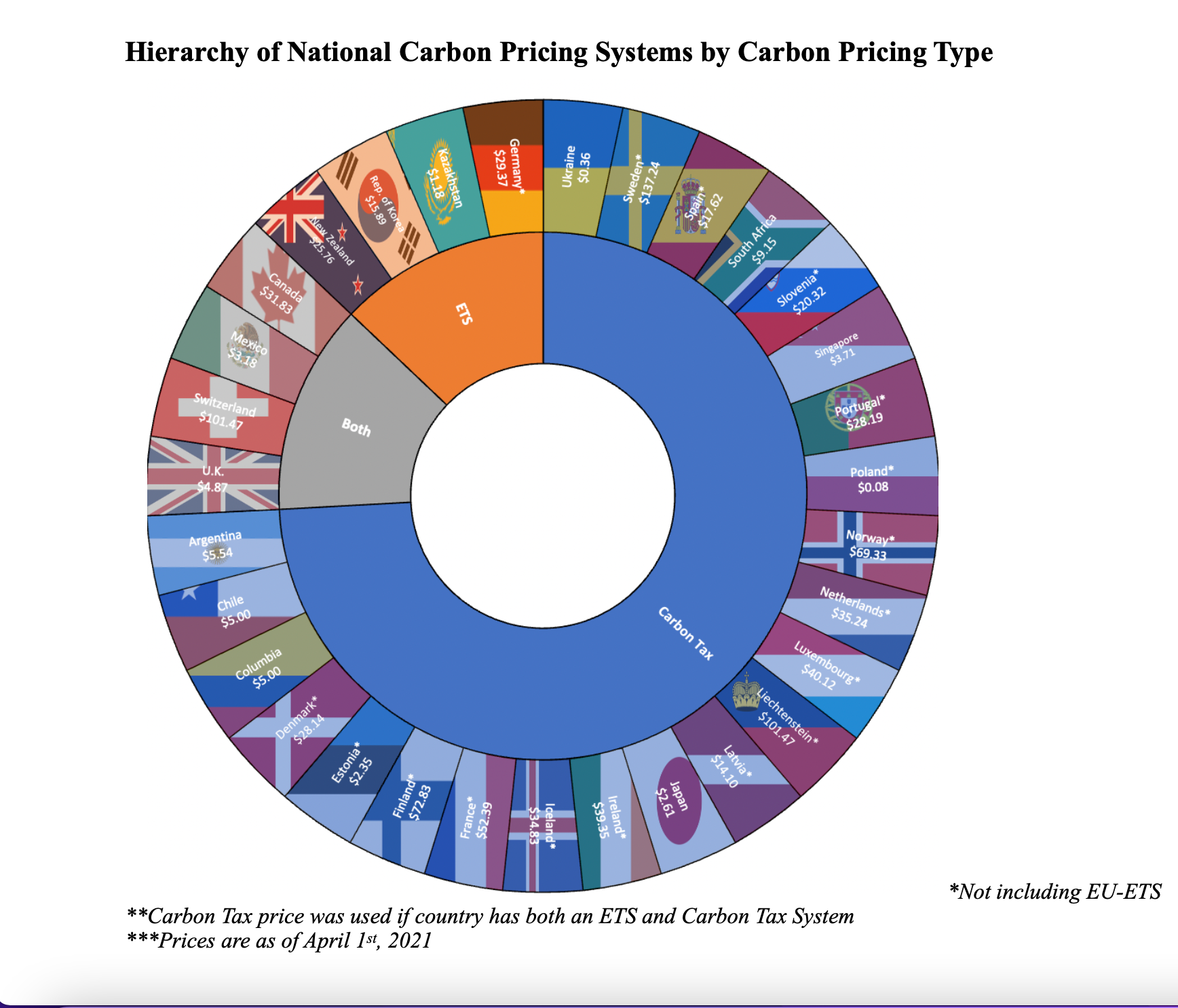 This patchwork of sub-national, national, or regional systems differ in three main respects: first, the type of carbon pricing system and price level implemented; second, the gasses covered by the carbon price; and third, the industries covered. These differences result in a host of practical challenges, including regulatory fragmentation, lack of cooperability, and most critically, carbon leakage—the phenomenon of carbon-intensive producers moving from regions with robust environmental regulations to areas with less stringent regulations in order to avoid higher compliance costs. Several nations are considering carbon border adjustment mechanisms as a short-term solution to address carbon leakage, but these policies are still in their infancy.

What questions and challenges remain to reach a global carbon price?

To remedy the larger problems that result from inconsistencies in national and regional carbon pricing systems, some countries, international bodies, and even the UNFCCC have called for global carbon pricing systems. At the recent Conference of the Parties (COP) 26 meeting in Glasgow, a group of international leaders representing Canada Sweden, Finland, the European Union, the International Monetary Fund, the World Bank, the World Trade Organization, and Dalmia Cement met to discuss the introduction of an international carbon price floor, a type of carbon tax meant to place a minimum price on emissions. UNFCCC Parties also adopted “rules of the road” to implement Article 6 of the UNFCCC agreement, a highly technical section of the agreement detailing how international transactions in carbon reduction credits should operate. (See Annex 1 for more detail.)

But despite the proposals and agreements that emerged from COP26, significant questions remain about the path toward a global carbon pricing system. For example, if a global carbon price floor is to be implemented, nations will still need to agree on multiple aspects and mechanisms of that system, including: the emissions and sectors covered by the carbon price, the pricing levels, any possible differentiated treatment for developing and least developed nations, which instruments are allowed to meet the agreed to requirements, and the necessary compliance monitoring mechanisms. Other questions remain about quantitative comparability and carbon accounting systems, with further challenges on implementation being the multitude of non-compatible national systems already in existence.

At the same time, the choice of forum will be critically important. While the UNFCCC has set forth a laudable framework for reducing greenhouse gas emissions and parameters for an international carbon trading scheme, adopting a global carbon price would inherently implicate multilateral trade rules, governed by the World Trade Organization (WTO), and tariff classifications for traded products, governed by the World Customs Organization (WCO). In the meantime, countries will continue with the existing patchwork of carbon pricing systems— supplemented by various carbon border adjustments—which will continue to spur trade disputes that will have to be worked out through the WTO.  For this reason, it will be essential for the WTO to work in close coordination with the UNFCCC, WCO, World Bank and other bodies to serve as a forum for negotiations on a global carbon pricing system and advancement in the interoperability of approaches beginning in the short term, even as it continues to play a central role in advancing a global carbon trade agreement over the longer term.

Among the Article 6 agreements include, but are not limited to:

Most mandated reviews and recommendations are scheduled for consideration in 2022.